It is easy to determine liability when one party is completely at fault and the other party is completely free of any wrongdoing. For example, consider a drunk driver who runs a red light and hits a pedestrian as he or she lawfully crosses the street at a crosswalk in downtown Jacksonville. The pedestrian walked out of his or her way to the crosswalk, waited for the signal, and then crossed the street, but got hit by the drunk driver nonetheless. Most juries would probably find the drunk driver completely at fault here.

However, fault is not always easy to determine. What if the pedestrian was not paying attention, did not cross at a crosswalk, and ran across a freeway when the drunk driver hit him or her? This presents a more difficult question: should the pedestrian still be entitled to compensation for his or her personal injuries?

The law in Florida addresses this situation through what is called “comparative negligence.” Under comparative negligence, a plaintiff’s recovery is reduced by his or her degree of fault. The doctrine, adopted by Florida in 1973, enables juries to assign blame or negligence more proportionately, rather than rendering an “all or nothing” verdict.

Comparative negligence applies an intuitive system to the law of negligence and victims’ ability to recover. Prior to 1973, Florida had what was called a “contributory negligence” law in effect. Under contributory negligence, if the plaintiff was at fault at all, there could be no recovery. Florida legislators realized that this often led to unfair results because victims were prevented from recovering when they were only 5 percent at fault for an accident. Under this method, the pedestrian in the first example above might not have been able to recover any monetary award at all if he or she failed to look both ways before crossing.

The difference between comparative and contributory negligence is critical to victims in any type of car, truck, motorcycle, or pedestrian accident. Often a negligent driver’s attorney will claim that the accident victim was at fault and not entitled to compensation. The defendant’s attorney may try to scare the accident victim into accepting a low settlement offer. However, this tactic should not be tolerated when it comes to accident cases in Jacksonville, because Florida applies comparative negligence. It is important to know your rights under the law so you can avoid being bullied into accepting a less than favorable settlement offer. 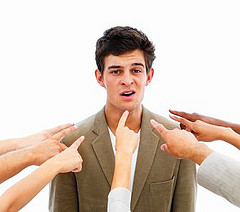 Comparative negligence also allows for multiple parties to be responsible to an accident victim. So, say two cars get into an accident and, as a result, a pedestrian is injured. The pedestrian will be entitled to damages from possibly both drivers, according to their share of fault.

If you or a loved one has recently been in an accident that you believe was the fault of the other driver, you should immediately contact an experienced accident attorney. With an attorney’s help, you will best be able to avoid the pitfalls of being an unrepresented accident victim. As an accident victim you have certain rights that, if unexercised, might expire. Click here to contact a local Jacksonville accident attorney.