Last month, a Florida man was allegedly driving under the influence when he collided with a car that was pulled over on the side of the road to help a friend change a flat tire. According to a story by the Tampa Bay Times, three female motorists got a flat tire and called three male friends to help them change the tire. When the male friends arrived, they parked behind the females’ vehicle and began to change the tire. 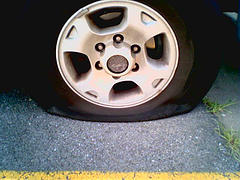 In the middle of changing the tire, a BMW came speeding down the highway and apparently didn’t see the cars on the side of the road until it was too late. The driver attempted to veer away from the parked cars, but ended up slamming into the back of the males’ car, sending it into the rear of the females’ car. All six of the victims were taken to the hospital and are recovering well.

The man driving the BMW was apparently driving under the influence with a breath alcohol content of .10. He was arrested and charged with felony DUI causing serious bodily injury. This was not the first time the driver had been charged with a DUI. Apparently, he was charged several years back with a DUI-related offense in Texas.

Driving Under the Influence in Florida

In Florida, like most states, driving under the influence is taken very seriously. And for good reason: the crime kills hundreds of people per year in Florida and thousands across the United States.

In Jacksonville specifically, it is illegal to operate a motor vehicle with a breath alcohol content of .08 or greater. There is no way to gauge exactly how many drinks it takes for a driver to get to that .08 limit, but generally two to four drinks in two hours will put a driver right at the limit.

When a driver is operating a car under the influence of drugs or alcohol and causes a car accident, the law holds that driver responsible to his or her victim. Victims in drunk driving accidents are generally able to recover for past medical bills, future medical expenses, and pain and suffering caused by the drunk driving accident. Punitive damages are also available pursuant to Florida law.

Jacksonville juries are generally unsympathetic to drunk drivers. Many in the community know someone who has been injured or killed by a drunk or negligent driver.

Have You Been Injured in a Drunk Driving Accident?

If you have been injured in a drunk driving auto accident, you may be able to recover a monetary award to compensate you for the injuries caused by the accident. To find out what rights you have and whether you need to act soon to preserve them, you should speak to an experienced Jacksonville personal injury attorney immediately. Click here, or call (904) 632-0077 to schedule your free initial consultation today.