Ten days ago, tragedy struck when a Jacksonville woman driving south on US 17 in Fleming Island was struck by a tractor trailer.  After being struck, the woman’s vehicle left the highway and impacted a support piling for the pedestrian walkway that spans from Pace Island to Black Creek.

Given the manner in which this collision occurred, it may have been due to the car being located in the driver’s blind spot.  The woman’s car was to the right of the semi driver and next to his trailer.  This puts the car in the classic location of a blind spot for the truck driver.

Due to the size of a tractor trailer, there are significant blind spots.  The height of the tractor adds to the problem as the driver and the mirrors make seeing a small car that is next,  and close, to the tractor on its right side very hard to see.

In order to prevent these types of collisions, defensive driving is a must.

In 1994, the Federal Motor Carrier Safety Administration (FMCSA) established a program related identifying “no zones” to educate the public on safely sharing the road with large commercial vehicles.  “No zones” are areas to avoid as they present blind spots where truck drivers may have a difficult time seeing you.   Advice for avoiding “no zones” includes:

-do not linger on the side of a semi truck, especially the right side, either speed up or slow down to get yourself away from a blind spot;

-when passing a semi truck, pass on the left side, again due to the larger blind spot on the right side of the truck; and

For their part, truck drivers switching lanes to their right also have a protocol for safety.  First, they are advised to signal lane changes at least five seconds in advance of their turn.  Next, they are to check their mirrors and to use a fender mounted mirror to provide maximum visibility.  Before turning, the driver must lean forward and over to look into the blind spot to make sure there are no cars in their right side blind spot.

Finally, truck drivers are advised to allow six seconds between the truck and the nearest vehicle they are following.  In this manner, the driver can safely stop and does not have to perform a sudden lane change to avoid rear ending another vehicle.  Such a sudden lane change usually does not allow time for properly checking for vehicles in the blind spot.

END_OF_DOCUMENT_TOKEN_TO_BE_REPLACED

The discovery of what federal investigators are calling an illegal commercial driver license scheme – that helped more than 600 people get Florida commercial drivers’ licenses without proper training – has raised new concerns about unqualified truckers on the highways of our state.

Many of the students in the scheme were Russian-speaking immigrants living in New York, Illinois, California and Virginia, according to federal-court documents.

Investigators say most of the drivers found out about the commercial license training through a now-defunct website — russiantruckingschool.com — and then traveled to Florida to obtain licenses to use back in their home state, according to federal court documents.

In July, United States Attorney, A. Lee Bentley, III, announced an indictment against four men with conspiracy to aid and abet the unlawful production of Florida drivers’ licenses and commercial drivers’ licenses (“CDLs”). If convicted on all counts, each defendant faces a maximum penalty of 30 years in federal prison.

The alleged scheme raises a number of concerns about truck accidents caused by these unqualified drivers and the liability of the carriers and employers hiring them.  As Jacksonville trucking accident lawyers, we have seen many instances in which trucking companies put drivers on the roads who should not have been there in the first place.

The evidence of the federal investigation is shocking due to its scope. The alleged scam involved more than 600 invalid commercial drivers’ licenses (CDLs) issued in Florida — to Russian-speaking truck drivers who did not receive appropriate training.

Apart from this scam, we already face a multitude of problems with unfit truck drivers. Many of the drivers who cause truck accidents on the roads of Florida have legitimate commercial licenses but may be unfit to drive due to other reasons. These include:

Drunk Driving – a trucking company has a responsibility to check a driver for past offenses involving alcohol or drugs and federal regulations set out strict drug and alcohol testing rules and regulations for employees who drive commercial trucks and buses that require a commercial driver’s license.

Distracted Driving – cell phone use, texting, interacting with passengers and even surfing the internet have all resulted in unnecessary and avoidable trucking accidents.

Driving while Drowsy – As many as one in five accidents are caused by drowsy driving and driving hours longer than allowed and untreated sleep apnea are big issues in the trucking industry. Trucking companies are responsible for making sure their drivers take mandated breaks, stay within allowed maximum driving hours and do not have untreated conditions that can cause safety issues.

Speeding – Truckers are under a lot of pressure to make deliveries on time and may put their foot on the gas in an attempt to catch up. At a higher rate of speed there is less time for truckers to react to other drivers and road conditions. Speeding can also lead to potentially fatal blow outs of heavy truck tires. Between 2009 and 2013, heavy trucks and buses were responsible for 14,000 fatal accidents. According to government figures, 223 of those fatalities were related to heavy truck tires that failed.

Two catastrophic truck accidents in less than a month on I-16 near Savannah, Georgia, not far from the Florida line, earlier this year highlighted the dangers posed by big rigs. Each crash claimed the lives of five people on the Interstate.

Earlier this month in Jacksonville, a driver of a Honda Accord crashed into a truck when the driver was attempting to steer clear of trash being thrown from the truck’s cab. According to a story by ActionNewsJax.com, the driver of the Honda was heading northbound on Interstate 295 when the occupant of a red truck began throwing trash out of the truck’s window. 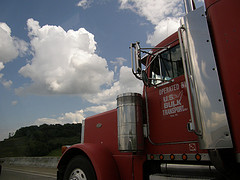 As the driver tried to get away from the debris coming from the truck, she ended up colliding with the truck and eventually overturning. The passenger of the Honda was ejected from the vehicle and was taken to UF Jacksonville in serious condition. The driver was also taken to Shands Jacksonville in critical condition. The truck did not stop, but continued on down the highway. Police are still looking for the driver of the red truck.

END_OF_DOCUMENT_TOKEN_TO_BE_REPLACED

A chain of vehicle collisions involving a sport utlity vehicle, a bus, a semi truck and two police cruisers occurred at approximately 6:00 a.m. today on northbound I-95 just north of downtown Jacksonville.

The collisions started when an SUV crossed several lanes of traffic and struck the right front of a tractor trailer. The driver of the tractor trailer applied his brakes and the semi “jack-knifed” causing it to collide with a school bus.

The semi truck collided back into the SUV and then hit two Jacksonville Sheriff’s Office vehicles, causing all four vehicles to leave the roadway and enter a roadside ditch.

Four people, including two Jacksonville Sheriff’s Officers, were taken to Shands Jacksonville Medical Center with injuries. Thankfully, the school bus did not have children on board.

The reason for the SUV crossing several lanes of traffic and striking the tractor-trailer has not been reported. Unfortunately, car and truck accidents like this are far too common. While we can only speculate as the cause at this point, it seems that impatience, aggressive driving or distracted driving probably played a role.
END_OF_DOCUMENT_TOKEN_TO_BE_REPLACED

https://www.lawyers-jacksonville.com/lawyer-attorney-1389491.htmlTwo residents of Palatka, Florida, were killed in a tragic and preventable rear-end collision caused by a semi truck in Alachua County earlier this week.

The two people killed were riding as passengers in a minvan stopped at a red light. A semi truck travelling behind them failed to stop and collided with the rear end of the minvan.

The reason why the semi truck driver failed to stop has not been reported. Since the vehicle accident occured at 5 a.m., it was certainly dark outside when the collision happened.

In investigating a wrongful death caused by a trucking accident, there are many nuances involved. First, unlike most car accidents – those that do not involve death – statements made by the truck driver, after Miranda warnings are given, will be admissable.

Second, most trucks are outfitted with computers that record truck speed, braking and turns. Cell phone records of the driver can demonstrate whether he was distracted by texting or by otherwise using the phone.

Finally, the driver’s mandatory log must be reviewed to determine how many hours he or she drove prior to the collison. Federal regulations prohibit drivers from operating trucks excessively as truck drivers are susceptible to falling asleep or otherwise losing their concentration when they are fatigued.
END_OF_DOCUMENT_TOKEN_TO_BE_REPLACED

Monday night, a tire came separated from the axle of the trailer portion of a tractor-trailer traveling on I-95 in Volusia County caused a fatal accident when a car traveling behind the truck struck the tire. In addition to the fatality, two people suffered personal injuries in the accident. The Florida Highway Patrol is investigating the accident. Volusia County is located about one hour south of Jacksonville, Florida.

In either case, the persons suffering injuries or the family members of the deceased person have the right to seek compensation. Through this process, they can get many of their questions answered. Why did the tire come off of the truck? Who was responsible for maintaining the truck? When was the last time the truck tire had been serviced or inspected? The state of Florida may or may not get to the bottom of these important questions.
END_OF_DOCUMENT_TOKEN_TO_BE_REPLACED

This morning on Jacksonville’s west side, a tractor-trailer overturned on Interstate 10 as a result of a tire blowout. The crash caused an 80-gallon fuel spill and demolished 474 feet of guardrail along the interstate. Fortunately, no one was injured.

The tractor-trailer carrying bottled water was headed east on I-10 when the left front tire blew. The driver moved to the left lane and struck the guardrail. East bound lanes of I-10 will be closed until noon so a temporary guardrail can be installed.